we gonna do the damn thing or what

The Afterglow (of a great tour)

A short video recap of the Second Heartbeat Tour and some context underneath.

I’m writing in the afterglow of one of the best tours I’ve ever had the fortune of participating in. The tour poster had my name on it but there were a lot of people who made it a success, and you were one of them, so thank you. I can staple words together but I don’t find it easy summing up exactly how profound it was to me. This time last year I genuinely doubted whether I would/could do another proper tour! Even with mid-level success the financial rewards in music make a low but steady income seem like big pimpin’. This new album was difficult, it took a lot of soul-searching, the indicators weren’t good – the kinda shit that spooks you. I couldn’t mentally envisage what shape my live show would take even if things went well – all I knew was that Jane wouldn’t be part of it.

A couple of years earlier I had a heart to heart with Jane Tyrrell where she let me know that she could no longer perform in my show; she needed to focus on her solo music career and other professional work. It was a bittersweet conversation, made slightly better by the fact we both felt it was the right thing to do. Years before that, I’d had a similar conversation with Elgusto, and we parted ways on great terms after an awesome decade playing live together. Each of their departures brought its fair share of anxiety and uncertainty: I can easily perform my songs but how fun could it be without such important ‘family’ by my side? Touring is not just about being on stage: it’s the ins and outs of building relationships, often from scratch, in a transient lifestyle characterised by endless “dead time”. It works when there’s a sense of camaraderie and love and respect but that takes a while to establish.

That uncertainty and the decisions that had to be made are the context for my current elation. Over the course of the last 6 weeks alongside Jayteehazard on turntables, Ev Jones, Meklit Kibret and Claire Nakazawa on vocals, and Todd Dixon doing the tour managing and sound, I felt like we were flying. The crowd response was, at worst, appreciative and loudly respectful; at best, the wildest crowds I’ve ever played to. I spent a lot of time at the merch desk taking a gazillion photos but ended each night wide-eyed about how much we were selling. The music I’d agonised over during the last few years was making people cough up at the merch desk in numbers I hadn’t seen for a while (we had great designs thanks Dale Harrison, Sarah McCloskey and Allara Uota). Physically and mentally it was a healthy tour and I took a lot of heart from the connections and relationships that developed between the tour party over the duration. It’s early days but I’ve loved playing live with this team. 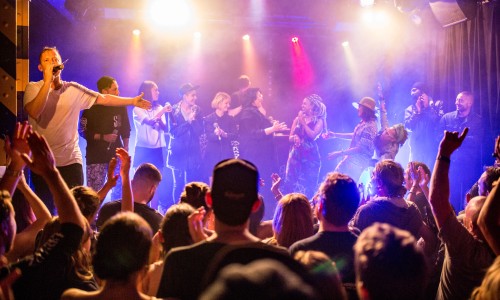 It was at the second Sydney show that I looked around on stage and saw myself and 4 guys, outnumbered by 8 uniquely talented women. I think this is the first time in my career where the ratio of women to men on stage was like that. It wasn’t a statement, it was merely the album’s guests doing cameos, but it underlined that there was something really special taking place. We had Kira Puru, Bertie Blackman, Jane Tyrrell, Montaigne and B Wise all sharing the spotlight. With L-FRESH The LION, Mirrah, DJ MK-1 and OKENYO, we also had a tour that reflected the changing face of local hip hop in as good a way as I’ve seen. Night after night, the atmosphere was electric and people sung and yelled and danced and went home joyous. We (mostly) woke up without hangovers.

I remember so clearly how low I felt wondering about the future in 2015, but as tickets started selling in 2016, I made a commitment to myself not to take any success for granted. We sold out the entire tour, bar a handful of tickets in Canberra, and that’s an amazing feeling. It’s one of the reasons I decided to donate every cent I earned from merch sales to charity. The total after paying manufacturing back was $4923.14 (this will be split between Grandmothers Against Removals, Tranby Aboriginal College and the Healing Foundation). I don’t want to front like I’m all G financially, but I’m very lucky, and don’t want to forget that.

After all that soul-searching, the album is going brilliantly, and this tour was all time – that’s no exaggeration. On to the next one.

The Secret Playlist Behind My New Album

I compiled a bunch of music that inspired my new album, The Past Beats Inside Me Like a Second Heartbeat. Some of these songs lifted me at low points, woke me up during a lull, snapped me out of a rut, all the good things that music does that nothing else can. Enjoy.

Q-Tip – Gettin Up Classic song from a brilliant comeback record. This wasn’t about loyalty to a group I’d loved forever, but more so an incredible return to form. It inspired me to see an artist that had been around for a while, do something with such undeniable impact.

Kendrick – You Ain’t Gotta Lie Can’t front on the fearless artistry on To Pimp a Butterfly (remember when everyone was freaking about about ‘i’?). I look up at the sun and see a force so bright that I wouldn’t dream of being compared, and that’s beautiful. Let the greats shine! His vision makes me not want to settle for less in my life, and I want to do things I thought I wasn’t capable of.

Ceelo – Gettin Grown Before Ceelo became a celebrity, he did amazing shit like this.

The Coup – Wear Clean Drawers Apart from my daughter, this was the inspiration behind Little Girl’s Dad. And although it’s in honour of her, LGD is an homage to this.

Raury, Big KRIT – Forbidden Knowledge To simplify a complex web of social injustice into an easily understood song concept is a stroke of genius.

Big KRIT – Saturdays = Celebration This knocked me the f out last year. The beauty and anger and frustration thrown into disarray by loss, it’s all handled so well here. I just hear resilience. Amazing.

Mura Musa – Lovesick In the world that Hermitude and a zillion wannabes inhabit, Mura Musa stands out. Downtempo electronic music has always struck a chord with me, ever since the late 90s where it wasn’t easy getting my hands on a lot of instrumental hip hop – I went to whatever was closest.

Jarryd James – Do You Remember When songs are everywhere. I think this is a classic.

Kira Puru – All Dulled Out You know those type of songs that you hear and can’t place them? Was this a hit from some big overseas act in 2014? I had a moment like that with this song a few weeks ago. It’s brilliantly written, gorgeously sung – a screamer of a tune. One of the songs of the year.

Joelistics, Kaity Dunstan – Out of the Blue I’d say this is under-appreciated because it’s not known as widely as it should be, but to the people that have really listened to it, and seen the video, there’s no under-appreciating going on. This will outlast a lot of the fad hip hop in Australia, and it’ll be one of the songs that is played for years to come. Beautiful storytelling.

Jayteehazard, (Leone) Rivals – Seen A tasty and moody gospel influenced electronic hip hop tune. Jayteehazard is my touring DJ, and one of the gentlest and funniest dudes you’ll meet. Rivals is a leader, a communicator, an artist and label organiser – his husky tones are like coals on a campfire.

And so much more.. briefly, Ngaiire’s Once was my favourite song of 2015; Caitlin Park guested on my album and I’ve included her personality-filled hooky tune Lemonade (you should hear her new shit tho); B Wise‘s 40 Days cos he’s about to tear the roof off this motherfucker; Okenyo’s incredible Just a Story (whoa!).

There’s 28 songs and almost 2 hours of music; play it while you’re cooking dinner, smoking a joint, brewing a coffee, whatever. Enjoy.

Roll Up Your Sleeves lyrics

I’ve been hit up a bunch of times to post the lyrics from my version of Meg Mac’s Roll Up Your Sleeves. It’s taken a while because I’m lazy but here they are.. check my earlier post (inc the video) here.

During soundcheck for the biggest show of Hermitude’s career, I received an email asking if I’d like to do the last Like a Version of the year. The catch was that I’d have about 8 days to put it together.

I stressed about it. I got appropriately drunk after the second of two crazyamazing shows and resumed peak anxiety about the like a version cover as I walked home at 6am.

There’s a long line of great covers that have been created for this popular segment on triple j so the prospect of pulling off something good in a short space of time was intimidating. First call? Manager Mondo. He suggested I work with a guy named Jack Grace Britten, who could assist with a musical arrangement. I was also staring down my first gig that weekend and was underprepared. I could feel my hair thinning and falling from my head like passengers on a sinking boat. I called Jack.

I shot an email to Tom Thum, an international star and an old mate I met through hip hop. He was in Abu Dhabi but was returning home a week before this. I called Luke Dubs, who had just finished a US/Europe/Syd/Melb tour and had every right to say no. I gave Kira Puru a buzz as she prepared for that night’s show with Paul Kelly on his Merri Soul Sessions vineyard concert. I checked in with Bertie Blackman, luckily back in Australia for a few months. Lastly, Mondo called All our Exes Live in Texas.

Despite hectic schedules and inconvenient timing, everyone said yes. It was a big deal. Jack shot me an arrangement and I began writing the first of two verses. I could go on and on but we made a little video that takes you into this process, and below that, is the end product: the live recording we did in triple j’s studios.

Oh and we did a live version of Long Loud Hours, which turned out beautifully thanks to the additional vocals of All Our Exes Live in Texas.

Thanks as always to triple j, they’ve created such a monster with Like a Version, a segment that’s been running for 10 years now. Also big thanks to Matt and Alex, and Greg Wales who engineered it all.